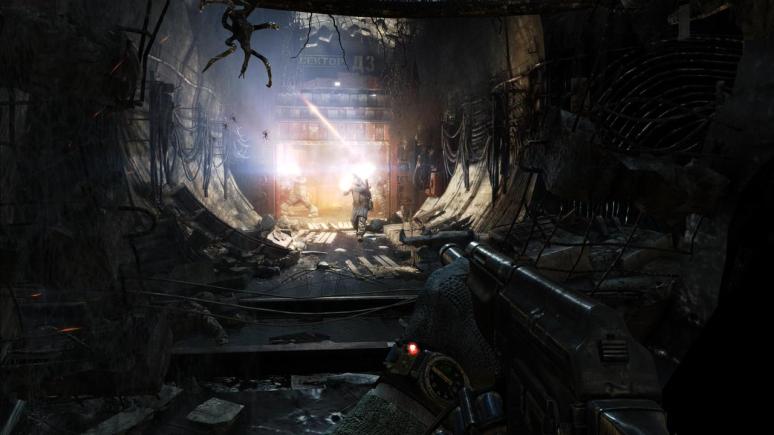 It’s predecessor was developed on a small budget, but was nevertheless one heck of a game and was very popular among gamers, both on consoles and PC. Due to this success, the Ukrainian studio 4A Games was allowed to spend more money on the developing process of Metro: Last Light, which is highly noticeable because the metro and Moskou look better than ever before, making even the most powerful PCs weep.

Metro: Last Light is a story-driven game, so don’t expect any multiplayer or co-op features (although multiplayer will come next year as a free DLC), but this isn’t bad at all, as some Call of Duty fanboys might be yelling right now. If there isn’t a multiplayer it means the entire developing time was put into creating a great storyline, which is, in my opinion, still the biggest part of any videogame and a fantastic story can melt away all the little flaws in graphical performance and gameplay. The story in Metro LL is about the same guy in 2033, Artyom, who blew up the entire population of Dark Ones who dwelled on the surface after the nuclear war. Of course, Metro 2033 had different endings, but Last Light takes place in the reality where all the Dark Ones were eradicated by a couple of Warheads, sent in by Artyom. At least, everyone thought they were all dead, but a baby Dark One managed to get away from the blast and survived, but after this he got spotted by Kahn, one of Artyoms friends, causing Artyom to be sent to the surface to REALLY kill every Dark One now. Because he is still a newbie Ranger, some girl named Anna gets sent along with you for a trip to the ruins of what was once Moskou.

When you have chased the little Dark One for awhile, you get captured by a Neo-Nazi patrol, which drags you to their base, where they want to execute you, after they checked you for abnormalities (the Nazis want to purify the Metro by killing everyone that has a skull that’s formed differently than their standards describe), but you manage to escape together with some Red Line officer. This guy, Pavel, helps you escape, after which he gets captured again and you rescue him from the scaffold. Although he had already helped you and you rescued him, Pavel eventually screws you over and takes you to the Red Line encampment, where you get interrogated by some guy that looks like a chubby Hitler (he’s not one of the Neo-Nazis, though). You get freed by “Hitler’s” son, because he doesn’t want to be like his father, and you flee back to the Rangers. However, there is a traitor called Lesnitsky, who is working together with the Red Line. He wants to help the communists unleash a deadly virus in the Metro, which will kill anyone that hasn’t got a gas mask on. The virus will then stop working after 3 days and the Red Line will be able to put their masks off and rule the entire Metro. I won’t spoil how it continues, because that would take me too far into details. You’ll just have to play it yourself if you want to know how the story ends.

Last Light runs on the 4A engine, the same one 2033 was based on, but there have been some major tweaks to the performance, causing the game to look super slick, even on consoles. Also, the Nvidia PhysX software makes environments even more realistic by adding wind effects and hard object interaction (e.g. debris coming out of the wall when you shoot it). On the console version the PhysX have been scaled down due to the outdated hardware.

In the future, 4 DLC packs will become available, said to run through the storyline from a different perspective, allowing you to play with other people than Artyom. 4A Games also has some plans to make a multiplayer part and giving it as a free download to everyone who owns the game (compare with the Sniper Elite V2 multiplayer pack). This expansion will probably be released somewhere in November, so don’t get rid of the game yet if you have completed the campaign.

In the metro you’ll be able to shoot with a lot of different weapons. You have shotguns, assault rifles, pressure guns, dart guns, pistols and snipers, all of which you have to buy with military rounds. There’s a wide variety of attachments too. If you want to pimp out your revolver with a stock, longer barrel, a laser and a sight, that’s completely possible because there’s no limit as to how many things you can put on a gun. As long as you don’t want 2 sights, everything’s possible, because, after all, were in Soviet Russia, where the guns put attachments on you (what did you expect? This is a game entirely set in Russia, so I just HAD to put a Soviet Russia joke in it). Also, try to find all of the books and posters by Dmitry Glukhovski, that are hidden in the game. They even advertise his upcoming book, Metro 2035. To survive in the metro, you have a lighter to burn cobwebs and torch some huge spiders, night vision goggles, medkits and a light, which you occasionally have to recharge by cranking a handle on a portable power generator.

Metro: Last Light is one of those few games that can really stick to you. You have the feeling you’re watching a movie and you want to keep playing until you reach the end, but then you’re a bit sad because it’s over. You can’t really derive from the ending if there will be a sequel, but I sure hope so.

One thought on “Metro: Last Light”