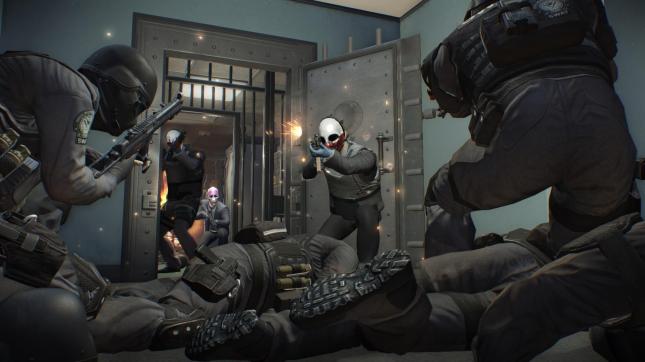 Payday 2 is the sequel to the massively successful Payday: The Heist, a first-person shooter game released in 2011 solely on Steam, in which you rob banks, crack safes and steal valuable objects. The first game was so popular on PC, that Overkill decided to release Payday 2 on consoles as well, which turned out to be a good guess, because just the pre-orders already covered all the invested money.

In the game you play as either Dallas, Chains, Wolf or Hoxton, four career criminals who recently moved to Washington DC to make big money as robbers and/or couriers for a couple of contractors. There isn’t a lot of story to it, since it’s all just loose levels that aren’t connected through a storyline. You basically just log in to Crimenet, you choose a contract and you complete (or fail) the contract along with a couple of friends.

A lot of features from the first game have been improved and there are even some new ones. For instance, the gun mechanics have been tweaked enormously, heavy loot objects tilt the camera due to the weight, you can throw the loot, etc. The biggest feature is most definitely the addition of skill trees. Each time you level up you get a skill point, which you can spend on certain skills that make your character a better criminal. The four trees are Mastermind, Enforcer, Tactician and Ghost. Each tree has its own usable item, like a doctor bag or a trip mine. The Diesel 2.0 engine also makes it possible to create a random structure each time you play a level. If the security room was on the right of the building the last time you played, it is likely to be located somewhere else now. This makes every heist different, so you won’t be bored easily.

In total, there are 30 different heists, ranging from a 1-day jewel store robbery to a master scheme which takes 7 days to complete. Of course, not every activity gets you the same amount of money. Completing heists with a high risk level or heists that feature multiple days will make you rich in no time. With the money you earn you can buy weapons, attachments, armor, mask customization and skills, but everything is really expensive, so make sure to pull off big heists if you want a good weapon or a cool mask. After every successful payday you get to draw a card, which unlocks different items in the shop.

You can play Payday 2 on your own, with 3 AI characters, or with other players online. The option that’s most fun is of course online play (and not only because the AI characters are too dumb to help you). This game wasn’t meant to be played all alone. It is foremost a co-op game, that has to be played along with some friends. Be warned, though, even if you’re playing along with 3 other good players, the game still isn’t easy. The police, SWAT and FBI teams are very unforgiving and they have absolutely no regard for their own life, so they will just walk up to you without taking cover and shoot you. That wouldn’t be so bad, if it wasn’t for the fact that they are all heavily armored and it may take an entire ammo clip to take one of them down.

Although the graphics could be a bit better, Payday 2 is still a really fun game and if you have some friends who want to play this with you or if you ever wanted to become a master criminal who steals paintings and transfers cocaine for a living, Payday 2 is THE game for you!